A little blood from a little wart 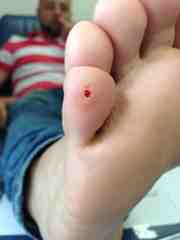 I want to show you what you should see after trimming off the top of a wart. Here is an example of a patient that has this little bit of pinpoint bleeding after removing the top surface of a wart. Usually when you look at a wart it will have little black dots that are caused by the blood vessels going to the wart. That is actually the food supply going to the wart and by trimming off the top you are able to see the little blood that is there. I tend to stop the bleeding first with some type of clear liquid and then I either laser it or I use topical medications to treat the wart. For a wart on this area on the fifth toe it is very painful to the patient and he has had it there for a long time. We also discussed the option of numbing the toe and just removing the wart. I always prefer to try topical treatments first because that gets your own body immune response working to take care of the wart itself. If you simply remove the wart you are not allowing your own body immune system to work and you have a greater chance of recurrence.